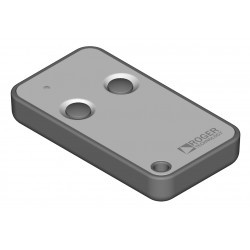 The buttons does not have predeterminated function and they can be

memorized in any receiver channel.

memorize the transmitter. When the button is released the relative led will

blink slowly 3 times, during this period press the button of the remote control

in which the code is to be stored. A long blink indicates that storage has been

successful, while 3 consecutive fast blinks indicate that the code of the remote

control has already been stored in one channel. The led will emit another 3

slow blinks while waiting for other storage procedures. If no other codes are

transmitted in this time, the receiver exits from the programming phase.

It is impossible to store the same code on both channels; each code is

associated with just one channel.

This transmitter is able to copy the code from another fixed code transmitter.

Be careful when you copy, it must be done by advised person and with good

battery, otherwise the copy does not work.

code together with the opposite button (A with B, or C with D).

• The LED blinks for 5 seconds, after it becomes fixed

• The LED sends out 3 long blinks

• In the meantime place the ORIGINAL transmitter in front of the COPY (FIG.

• The LED sends out short flashes waiting a code to copy

– If the LED turns on for 1 second and after turns off the copy is done. Now

you can release all buttons. It is strongly recommended to check that the

code is recognised by the receiver, otherwise repeat all steps.

– If the LED continues to send out short blinks, it means that no codes are

received, so be sure to push the ORIGINAL transmitter button or move

the transmitter to maximize the signal coupling. However if it does not

– If the LED still on, the copy is failed, please retry.

– If the LED send out fast blinks and after it still fixed, it means that the

battery has not enough energy to perform the copy